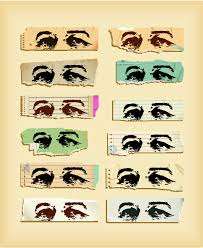 What defines art? In the decades and centuries before us, art was always defined by a period or a happening, it was always in the sense that art was molded, by a person, a event, anything. Art in recent decades was never “free”, it was never a case of “because I can”, but “because this happened”, including the way society works and the pressure from, on and through it.

Could that kind of rule be applied to modern day settings? Society plays a huge role in a life of a modern man and woman. Friends, family, co-workers and so forth are part of your group of people whom you know, trust. What would happen if you’re a loner? How would you call yourself, how would you react. If by today’s standards everyone has to be similar in order to be accepted into our society, how would the person who isn’t apart of the system be called? Would he even be called, would others care for him? He, like many others similar to him would have a title, a name which describes him in the most negative fashion, as we don’t give any word of fame to people different then ourselves. Reject. He would not be like the others, fitting into the mold of society and let alone an active member of society. He sees society like a machine, while he is the cog which keeps it turning. He has own ideas, ideas which may grant him fame with the people similar like him, or he will be simply a “crazy fool”, in the views of others. What if that individual, the one person who’s shunned from others knows how to express himself in a way that would either shake the art-world of this decade or build it anew? What if a individual abandoned and rejected from everyone but his very own mind, would show what exacty it is that’s floating inside his head? Now, there are a lot of different reactions to it, from wondering if people would see the genious in his expression, or assume it’s just a sad attempt at communicating with people, but he will be understood by the kind of people who are like him. The kind of people who are neither cogs nor machines, but thinkers, people who understand that being normal is just the fear of being rejected, of being put aside by the people they knew and trusted, loved and cared for. Why? Because people fear change, yet the only thing that is persistant in life is the change which they fear, and they try to avoid it in order to delay it, but delaying the inevitable is like denying yourself who you really are. The thinkers, rejects or whatever we may call them, they would understand art, because art is not something you can touch, it’s the message which goes through your heart and mind when you see something. When it screams at you what it wants to, when it tells you something different every day. That is art, the art of people who have been given up on, who are not afraid of showing their colours. Rejectionism. It would be based on all the troubles modern society is facing. Similarities, being just a pawn in the game known as life, being used and abandoned by others because they fear “different” people, because they’re afraid of the monsters lurking inside difference, while the sad truth is that people who are in charge of those “machines” are the people who stopped fearing those monsters, because they realised that that’s what they are. Rejectionism would not be like art, it could not be like any other art. It is not designed nor meant for everyone, it is designed for those who trully enjoy art, and are not fixed in their reactions and perception of it. It would be filled with some of today’s most common emotions; sadness, doubt and depression together with happiness and hope. It would be meant for the few who feel they have no place in the world, and not very many hopes for a better tomorrow. Rejectionism would be something not everyone could understand, the paintings dark, yet colourful and inspiring. It would not have a set mold, as it wants to show quite the opposite, that nothing has to be set, no rules are there forever, and some are there just to be broken. Their paintings would be a mirror to their emotions, their thoughts expressed through forms and colours on paper, colours fitting with the way they feel, it would be a emotion and thoughts based art, which everyone could percieve as they wish. Rejectionism would be a modern art on it’s own, it could not stand with anything as it is something created by the abandoned people of society, for their own kin. It’s to help them, and themselves throughout their lives and the lives of the ones like them. The counterpart, music, would be in a rebel fashion. It would speak about today’s kind of society and what we currently live in, mainly with their view of abandonence and rejection. Just as the art, there would be no set kinds of music, they could create everything from metal to rock to rap, aslong as it’s what they trully feel and experience, which is the entire point of rejectionism. Their modeling of tones, which can also be connected to the modeling of sculptures would be rather dark, as the main theme still lies negative emotion and experiences. Sculptures with faces looking down to the earth, showing dissapointment and grief rather than looking up, questioning the world and hoping for a brighter tomorrow. The forms of the statues would be flexiable, from animals to humans to shapes not known to others, perhaps not even known by other rejects apart from the creator himself. Rejectionism, true to it’s name would simply be something created from people not wanted in the society, but still looking to be wanted with people similar to themselves.

After all, people are still people, no matter how many times we toss the coin, people will still long for affection and for attention, and rejectionism may very well be the attention and affection people who are abandoned need and deserve.